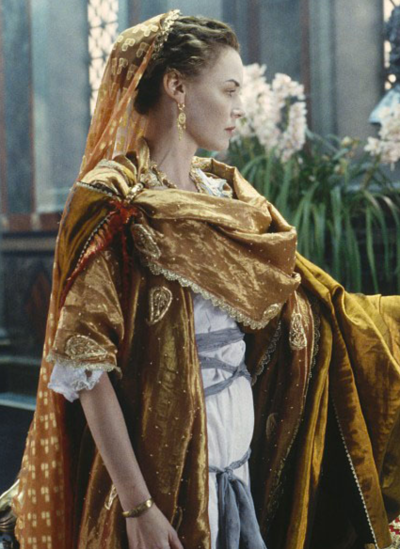 In case you didn’t guess from the title, this article is about Greek girdles. There is a standard “harnessing” style in the SCA using a rope belt to go over the shoulders then down the torso and around the waist and possibly even to the hips, similar to this image of Lucilla from Gladiator.

I admit that I accepted it with no documentation from others in the SCA as acceptable for Greek attire and have been wearing a version of it for a few years. However, over the last year, the more I looked at primary sources, the more I got the uneasy feeling that this is another myth, or that it is, at least, not Greek. (I have said this before: I know next to nothing about Roman clothing. It’s possible that this style is Roman, but Roman is still not Greek!) Further confusing the issue is what to call girdles. One Greek word for belt is zone (ζώνη) — “belt, girdle: lower girdle, worn above the hips.” Examples of translations using this word appearing in Greek literature are:

There is another word that is translated also as girdle, zoster (ζωστήρ) — a warrior’s belt — that seems to be different.

It is somewhat confusing that the word used for the belt the Persian warriors hung daggers off of is not the word for a warrior belt, so it’s possible that these two words have a considerable amount of overlap, or it’s possible that we are looking for at least two different items. I think there may be even more different “girdles,” and I have yet to find the Greek word for the cord that is used to tie back the fabric of one’s sleeves, so I shall call it a shoulder harness. The evidence points to a wide belt around the hips, as well as a cord that can be tied under the breast or lower around the waist, around the shoulders, or possibly around the shoulders and then passing under the breast or lower around the waist. Additionally, the shoulder harness can be worn with a wide waist belt! This is surely confusing, so let’s look at some examples.

The Charioteer of Delphi bronze (below) is wearing what looks like a metal or possibly leather belt and a cord in a “figure 8” shape over the shoulders. 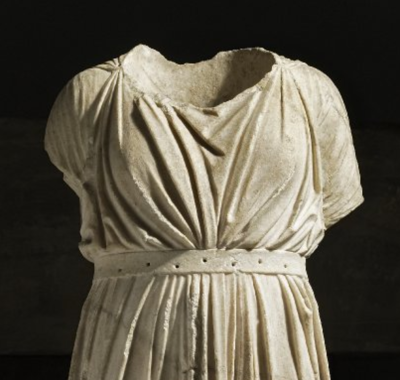 This marble from the British Museum (right) is said to be a charioteer wearing a belt that once had metal attachments. What is striking about this statue is that it looks like the charioteer is wearing a Doric chiton over an Ionian chiton, which seemed to be more frequently done by women, and the figure seems to have the hint of breasts. I recall a story about a Spartan princess, Cynisca, who trained her team and entered them in the Olympics — and won — but my understanding is that she was not allowed to charioteer for her own team. She was reportedly honored by a bronze statue of herself, but there is no mention in the caption for this statue of Cynisca or if this is even a woman. In any case, this statue shows no obvious shoulder harnessing. It would be hidden by the Doric chiton if it was present on top of the Ionian chiton itself. Otherwise, it’s possible that layering the Doric chiton on top serves to hold back the sleeve fabric in the same way as a shoulder harness. The belt may be leather or metal. 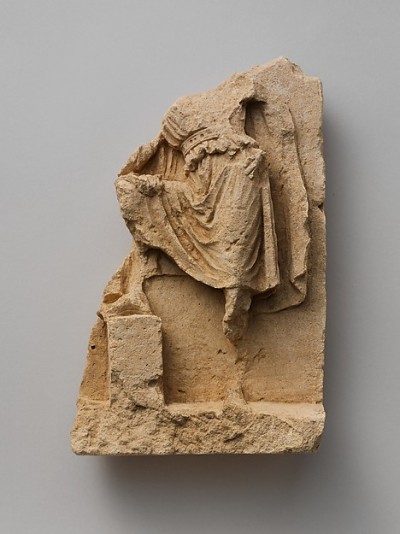 In this relief fragment (right), the figure wears what looks like a chiton that has been cinched up probably with a cord (see the kolpos (κόλπος) or fabric that has been pulled up over a cord to create a pouch-like overflap) with a wide belt (holes for missing metal roundels/plates) overtop.

The idea that these wide belts, particularly those seen on charioteers and warriors, might be metal comes from these two extant Italic belts (below) from the Met. 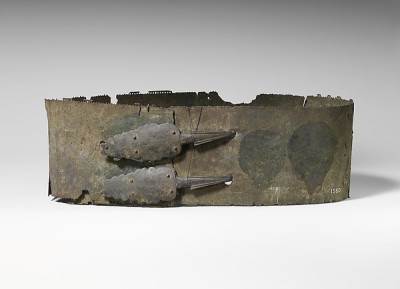 The broad metal belts may be displayed on pottery like these white belts which appear in the same color as the helmet, shield, and armor (below).

The below piece supports the idea that these types of belts were often decorated with metal plates. The Phrygian is wearing a crossed chest harness, described as bandoleers, which is seen on hunters and warriors in addition to a waist belt. 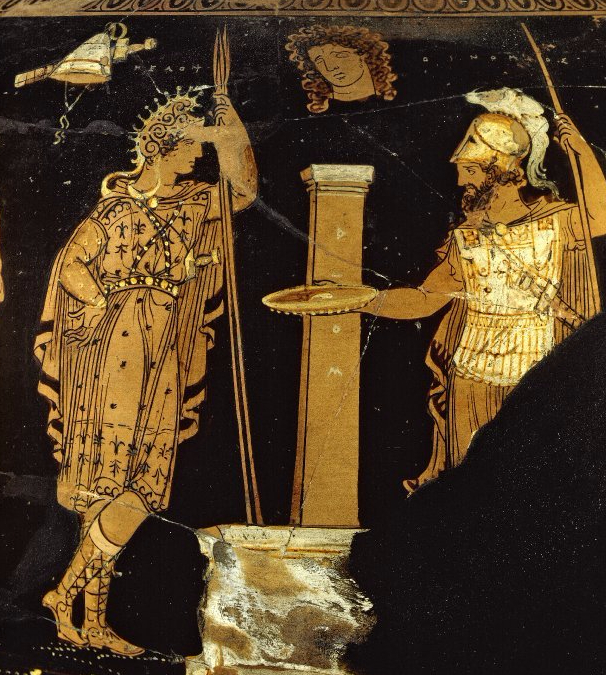 Another metal belt example (below) shows that they may not need be as wide as the Italic warrior belts shown above. 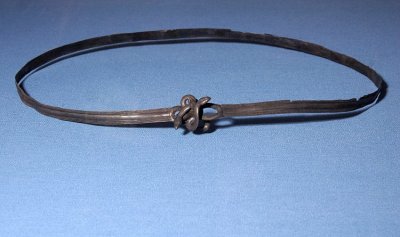 The man in this bronze figurine (below) wears a wide belt with fringe that suggests it may be woven. This style seems to be very common and is probably quite old. While I don’t particularly wish to discuss the archaic period here as there is so much that can be looked at, most images of peplos kore like the one below (two down) from the Akropolis Museum in Athens show what looks very much like a woven belt in the white and green belt around her waist. 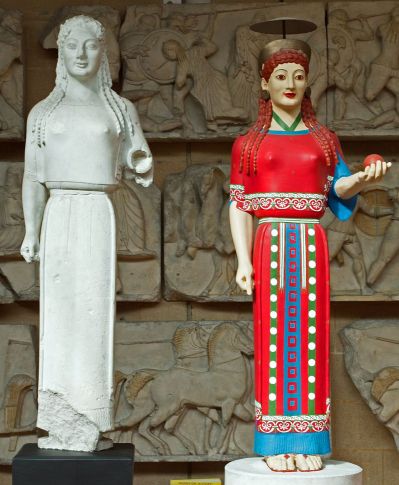 In this piece (below) from the Met, Artemis wears a peplos that has been tied around her waist over the apoptygma. We don’t see the belt directly as what looks like a kolpos obscures the view, but the thin loops suggest a chord is used as the tie.

However, Artemis is frequently shown in the attire of a huntress. In the first bronze from Piraeus (two images below), she is shown wearing a thicker “belt” under the breast with an attached strap that also seems likely to support a quiver.

In the second bronze (two images below), she is shown with a knotted belt and a decorated strap that I presume is supporting a quiver.

Another marble from the Met of a woman (below) shows again the thick belt around a peplos. 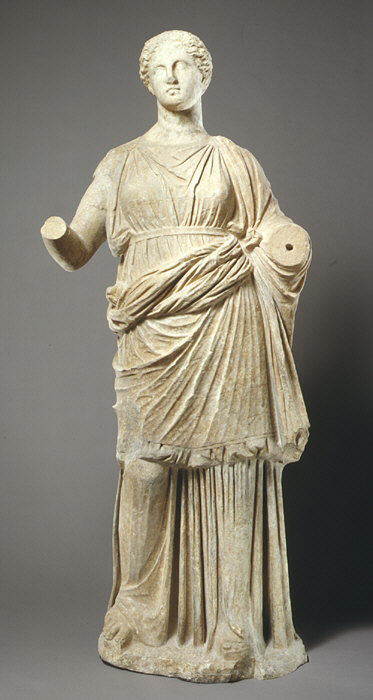 This statue from the Met (below) is of a woman in an Ionian chiton. We can clearly see the cord around her waist and what looks like a cord around her shoulders. Unfortunately, we can’t tell whether these are two separate cords or the same one. The Met’s description states:

The crinkly linen of the chiton and the heavier wool of the himation (cloak) are carefully differentiated, and horizontal press folds add variety to the latter’s surface. The drilled holes on the sleeves once held metal buttons. The upper part of the chiton is kept firmly in place by a cord that is crossed in back and slipped over the arms. 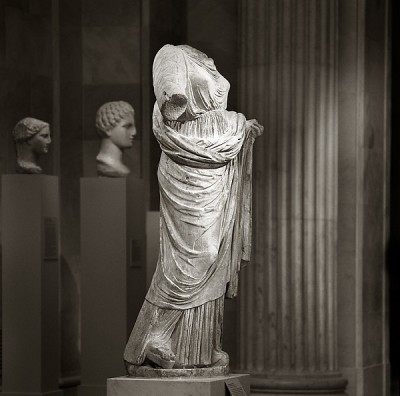 The same is true of this statue of Aphrodite (below); we see what looks like a cord around her shoulders and one under her bust. We can see her entire upper body unobscured by himation and it is obvious that she has not girded both under her bust and at her waist. The assumption that the topology we see by her right shoulder is a shoulder harness rather than the edge of an additional layered garment is based on how sheer the garment is; if it were two garments, we can hypothesize that we would not see her belly button in such detail. Another reason is the lack of multiple neckline edges. The final is that the museum makes no mention of a second layer.

She wears a thin chiton girded just below the breasts, and her himation (cloak), which must have been draped over the missing left arm, falls in thick folds between her legs.

There are horizontal lines across her right arm that look like the thin linen of her chiton creating folds. Given the impression of sleeves, the thinness of the garment, the museum’s description, the way the sleeve is being held back against the arm, and the topology between the breast and the arm, and the way the same types of things appear in the above statue, I feel comfortable claiming that this is likely a shoulder harness without being able to examine the statue myself. 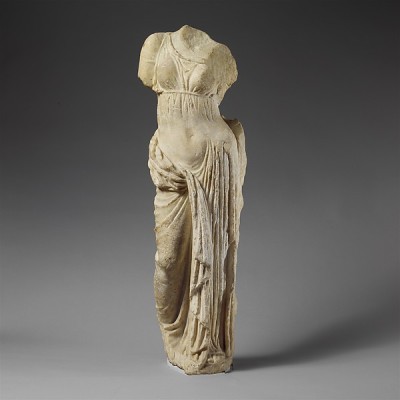 In this statuette (below), she may be wearing an Ionian chiton or a Doric one. The way the fabric pools around her breast suggest to me that it’s Doric. We see the cord under her bust and, again, it does not continue to her waist, but we can’t really tell if she has a shoulder harness.

I love the below image for its color, the deep dive her chiton is taking on her neckline achieved by draping, and her melon coiffure which is my favorite Greek hairstyle. I also love it because it looks like she’s wearing an Ionian chiton but with really short sleeves and it does not look like she’s wearing a shoulder harness. We get the impression of a cord under her bust.

Update: I wish my hair was out of the way in this photo, but this is an example (albeit wrongly worn over Doric chiton layered over a short sleeved Ionian chiton, so learn from my mistakes!) of what it might look like if the shoulder harness and high-waisted/underbust girdle were made of the same cord. Like the Charioteer of Delphi, the shoulder harness portion is a simple figure 8.

Update: after visiting museums in Greece and getting to take photos of the backsides of statues, I believe that the shoulder harness is a separate piece and that it usually took the form of a simple figure 8. Pictures and details are in this post.

The short answer is:

What the Evidence Does Not Support

I have not found any examples of a shoulder harness being used with a peplos or Doric chiton. Both of these items seem to use waist/underbust belts only, which supports the idea that shoulder harnesses are for the express purpose of creating sleeves from the voluminous bags that are unbound Ionian chitons. I have also not found any examples of the shoulder harness cord being wrapped around the body multiple times creating a tight-fitting torso shape like in the Gladiator costumes. This seems to be a myth. I would love to hear from my Roman friends if this is a known Roman style!

This is my persona in the Society for Creative Anachronism. This site provides a way to organize and share my research and art. Andromeda Lykaina is a 4th century BC Spartan woman. Contact me via gmail: andromedaofsparta. View all posts by andromedaofsparta

4 thoughts on “Gird Thy Grecian Loins”